In this article I will review the different types of propulsion found in yachts and the benefits of each.  This will help to understand why certain yachts have the powertrain they do.

Straight Shaft inboards are the most traditional type of propulsion in use today.  It is comprised of a rear-facing engine connected to a transmission which has a driveshaft going straight out of the bottom of the boat.

See in the photo above a boat hauled out of the water the shaft coming out of the bottom of the boat.  It is held in place by a strut right in front of the propeller.  The thrust that is created from the propeller is directed by the rudder behind it.

Illustration of a V-Drive Inboard Yacht

V-drive inboard yachts have forward facing motors with a transmission that re-directs the drive shaft towards the back.  On the bottom of the boat the running gear looks the same as on a straight shaft inboard.  You will see this application on cruising motoryachts that want to maximize the amount of interior cabin space, and where performance is not necessarily a top priority.

Benefits of a V-drive Inboard:

Drawbacks of a V-Drive Inboard:

The jet drive is very common today in runabouts and tenders, primarily because of the perceived safety of the propeller (called an impeller here) being on the inside of the boat and the shallow draft.  Because there is no way to reverse the impeller, a cover goes over the jet nozzle to re-direct the thrust backward to move the yacht in reverse.  In larger yachts jet propulsion is not nearly as common as in runabouts, you see it mostly on yachts that value speed.  When in the yacht category, there are also other benefits…

Jet Drive on a 38R Hinckley

Illustration of a Surface Drive

Surface drive yachts share a lot of similarities in function to the jet drives.  The propulsion unit comes out of the back (transom) of the yacht instead of the bottom and the thrust can be directed with a number of hydraulic rams attached to the shaft.  The main difference is the propeller is on the outside of the boat.  They are called surface drives because the top half of the propeller is out of the water while underway, which reduces cavitation and kicks up a really cool rooster tail!

Profile of a 70 Pershing with Surface Drives 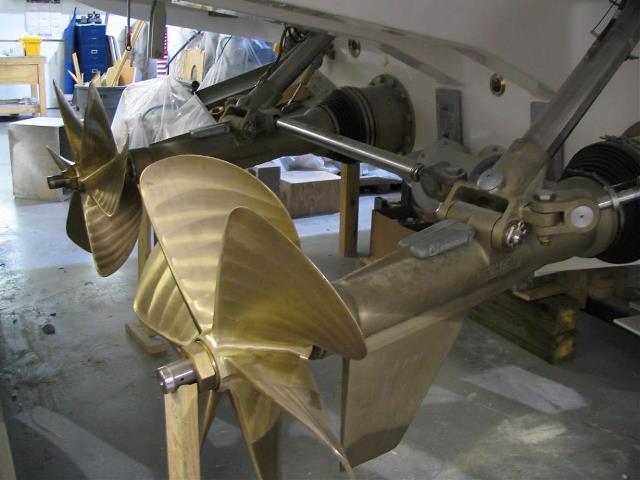 Picture of Surface Drives on the Back of  a Yacht

Bottom line for surface drives- If you want the ultimate in performance and handling and do not care about increased maintenance and costs, a surface drive boat is for you…Pershing’s entire lineup is surface drive propelled and they are some of the most beautiful and fun to drive yachts out there today. 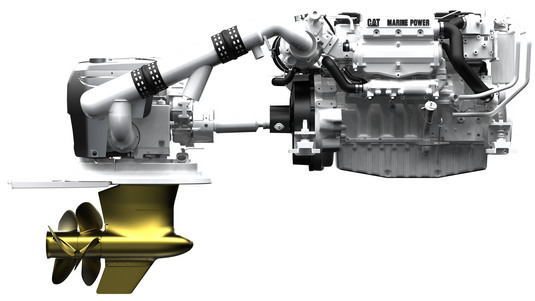 Zeus Pod Drive and Transmission Mated to a Caterpillar Engine

Pod drives first hit the scene in 2006 and since then they have gained a very prominent place in the yachting industry.  There are 3 manufacturers that are making pod drives: Volvo Penta (IPS Pods), Mercruiser (Zeus Pods) and ZF Marine (ZF Pods). 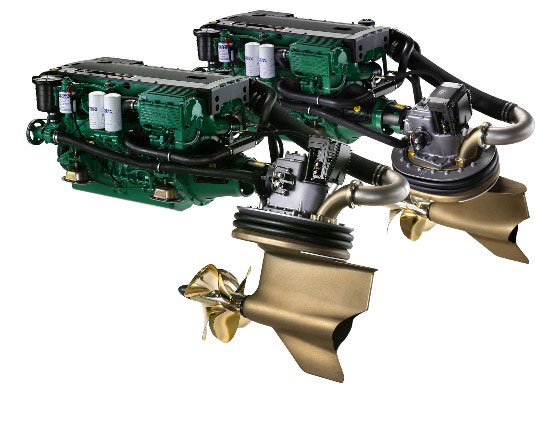 Each manufacturer makes a few different size configurations, but they are available for engines ranging from around 300hp to about 1100hp…enabling them to work in boats from about 30ft to over 100ft depending on the number of pods and the style of yacht.  For the system to work you need at least 2 pods, but some yachts, like the Lazzara 76 LSX quad, utilize 4 Volvo IPS pods.

The pods themselves are a very efficient form of propulsion that provide a great degree of handling and performance, with counter rotating propellers that direct the thrust and large gear housings that act as rudders…the yachts steer and handle like a much smaller sport boat.  In addition to those benefits, the pods are also mated to a joystick maneuvering system that will independently actuate the pods to make for precise docking and low speed handling.

The final kicker is the position holding ability that pods have.  Called the Skyhook on Zeus pods, it will hold the boat at a fixed location via GPS regardless of the wind and current…waiting for a bridge to open? No problem 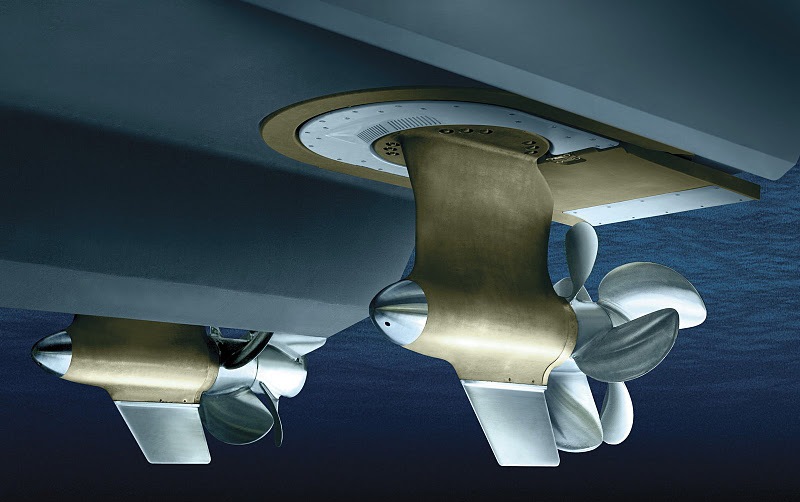 Illustration of Zeus Pods on a Yacht

In Summary, there are proper applications for every type of propulsion depending on your requirements and needs in a yacht.  I hope this gave you a better understanding of the different types of propulsion that are available.  If you would like to discuss further or have questions, I can be reached at Jimmy@tgyg.com.