There are currently 3 different manufacturers producing pod drives for recreational boat applications, Volvo Penta has IPS, Mercruiser has Zeus and ZF Marine has the ZF pod.  In this article I will explain each in hopes that you will have a better understanding of them and their primary applications. 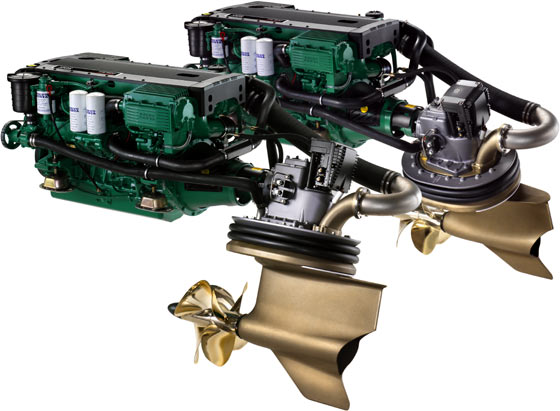 Volvo Penta was the first company to come up with a pod drive system back in 2005, beating out the Cummins Zeus pod by over 2 years.  Today there are more than 10,000 IPS units installed in more than 250 boat models worldwide…making it the most widely used pod drive system in the world by a long shot.  This is largely due to the range of applications the IPS pods will work for, there are 9 different power packages available with 3 different pod sizes, and the ability to have 2, 3 and even 4 pods on a single boat.

Another nice benefit of the Volvo Penta IPS system is that the entire powertrain is manufactured by Volvo Penta…keeping the entire system under one umbrella…which is very nice to have when dealing with service or maintenance issues.

Volvo Penta’s IPS is the only pod system that has the twin counter rotating propellers facing forward, which they sell as being more efficient because the propellers come into contact with undisturbed water in front of the gear housing.  From my experience and what I have been able to gather, this may result in a couple extra knots, but there has never been one of the same model boats with equally powered systems to run the test…the truth is that it depends more on the type of boat and hull construction, whether it would benefit more from forward facing propellers.

Also unique to Volvo Penta IPS is the angled (to match the angle of the keel), flush mount orientation in which they are fixed to the bottom of a boat.  I believe the idea here was to expose the props as much as possible to the clean, undisturbed water for maximum efficiency.  However, this also leaves the pod fully exposed to potential debris or the bottom in shallow areas.  For a major grounding or hitting large debris, the pods are made to break away from the hull without causing a water intrusion…additionally you can recover the lost pod, and if not too severely damaged it can be fixed and re-attached. 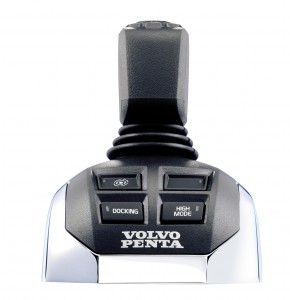 The joystick system for the IPS pods is great and offers some neat features, aside from maneuvering the boat in the direction that you point it. 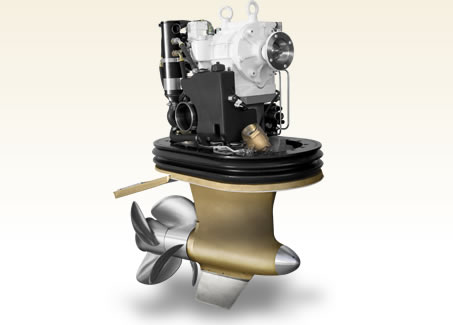 The Cummins Mercruiser Zeus Pod first came onto the scene in 2008 following the introduction of the Volvo Penta IPS pod.  It is interesting to note how both companies came up with a pod drive the does basically the same thing, but are so different in their design.

The Zeus pod comes in 2 different sizes, called the  Zeus 3500 and Zeus 3800, with power applications ranging from 330hp to 715hp.  Primarily coupled with Cummins engines, they are also starting to be made available with Caterpillar engines.  Because of their more limited power range and only 2 pod sizes, the Zeus pod has not been as widely used as the Volvo Penta IPS system…but that does not mean that it is not as good in the size range of yachts it is made for!

They have been placed in yachts ranging from 35ft to 75ft, but I think that they are best suited to express style yachts in the 35-55ft range.  Sea Ray’s Sundancer models are excellent with it as are Riviera’s 5000 Sport yacht and others of this type.

The Zeus pod incorporates into the singular pod piece the engines raw water intake, exhaust outlet, transmission and trim tab….which results in less holes drilled into the bottom of the boat for water intakes and trim tabs and making for a simpler installation.  It is also made to be mounted on a flat surface so the pod is directly perpendicular to the hull, and within a tunnel. 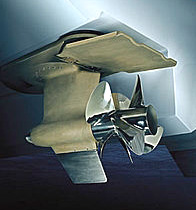 The 2 counter rotating propellers are mounted behind the gear housing as well, and that along with the placement in a tunnel create a great amount of protection for the props.  For additional protection, there is also a scag at the bottom of the pod that is made to shear off in the event that the bottom or debris is hit without damaging the rest of the pod system.  If there is a major impact, the entire pod is made to shear off as well to prevent a breach of water into the hull, and the pod is recoverable if not too badly damaged it can be re-attached.

The trim tabs on the back of the pod operate automatically to make for a lower bow rise when getting on plane and maintaining good visibility when underway.  These tabs, along with the steering of the pod, are actuated by a hydraulic system that makes the movements more quickly than the electric power on the Volvo Penta IPS system.

The Cummins Zeus system is also known to be very quiet, due to its underwater exhaust outlet with exhaust bypass, that not only reduces noise at low speeds, but reduces the exhaust induced vibration found on IPS pods. 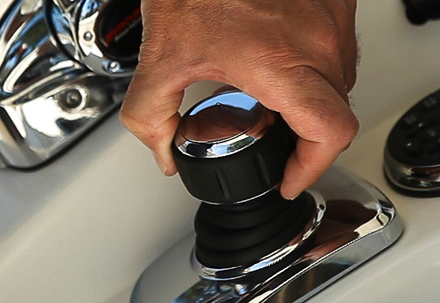 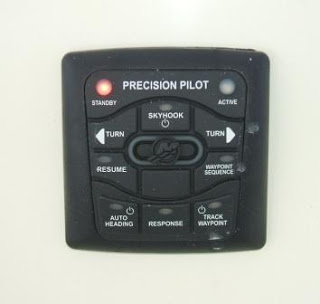 The Joystick and software system that comes with the Cummins Zeus pods also offers a lot of great benefits: 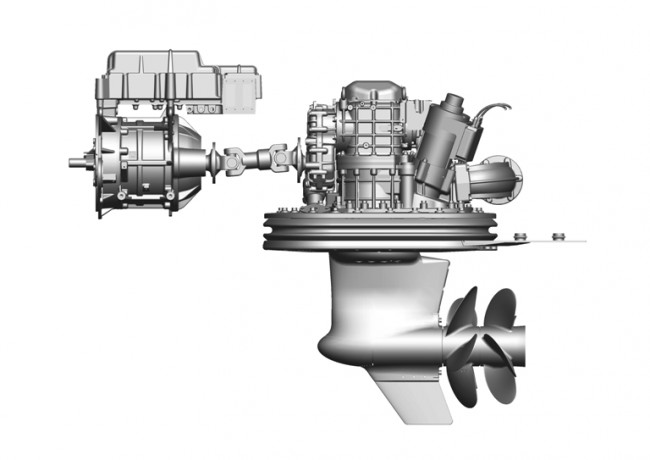 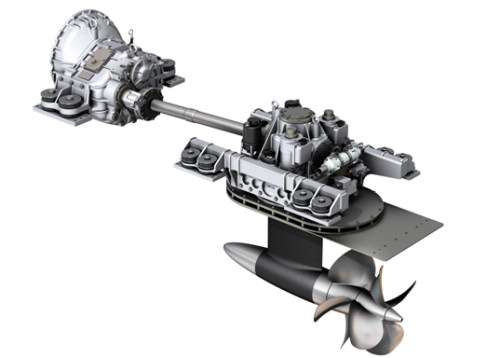 ZF Marine is known throughout the marine industry as a maker of transmissions that we see in many yachts.  The unique feature of the ZF pods is that the transmission is not part of the actual pod, so the gear reduction actually occurs on a more traditional type transmission directly attached to the motor vs. built into the pod itself…this makes sense for a company that is known for its transmissions…why re-tool one that goes into a pod when you have perfectly good ones that work directly connected to a motor?

The smaller 2500 and 2800 Series Pods are eerily similar to the Cummins Zeus Pod and have many of the same characteristics, with the exception of the Skyhook position fixing and integrated trim tab.  Additionally the ZF pods are controlled by an electric motor like the Volvo Penta IPS pods vs. the hydraulic system on the Zeus Pods.  These pods are made for yachts 30ft to 48ft in length with engines up to 480hp.

The larger 4000 Series Pods definitely seem more unique.  It is a rear facing pod with the counter rotating propellers, but it is made to handle engines with up to 1200hp.  To control that much power, the pods are made to me mounted directly to the yacht’s stringer system with shock absorbers…which means a hull will have to be custom made just for this pod system.  The 76 Monte Carlo is equipped with this pod system and can reach speeds up to 34mph with 2 of these pods mated to MAN 1200 engines.  That is an amazing amount of speed in a yacht that size for that small of an amount of horsepower. 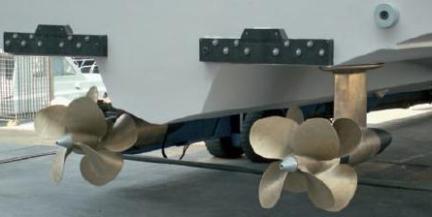 Both ZF pods are placed in prop tunnels like the Zeus drives and feature:

In the US marketplace, the ZF pods are not very common, getting beaten out by the IPS and Zeus Pods…but you will see them occasionally.  Also noteworthy is that ZF has put a single 2800 Pod into a center console as a prototype that has 180 degrees of rotation with a bow thruster to assist with sideways docking…neat concept, but it has yet to be seen if it will catch on.

For more information about Pods, visit my other article: The Truth about Pod Drive Powered Boats and Yachts