Building a new yacht with Hatteras can be a very fun and exciting process!  From the initial planning stages through construction and final delivery, you get the pleasure of seeing your dream become reality.  All this with the piece of mind that the Hatteras name carries…you know that you will get the highest quality, safest and most reliable yacht available today.

Additionally, the Hatteras of today has invested heavily into R&D to deliver the latest technology and designs to keep up with the demands of the new class of yacht owners…available with gyro and zero-speed fin stabilization, joystick docking with position hold, resin infused lighter and stronger hulls, and the latest in interior woodwork and décor.

Hatteras falls into the category of a “Semi-Custom” builder, which means that they build yachts in series, but enable an owner to make certain changes to the yacht to fit his particular tastes and needs, so long as it does not affect it’s performance or structural integrity.  This ensures the prospective Hatteras owner that he will be getting a tested and proven yacht that is designed to perform to a certain specification, as well as have input into the layout and décor…the best of both worlds!

Client “Jack” called me in the summer of last year after hearing that Hatteras was going to launch a new model, the GT45x.  He was a very experienced boater and fisherman who knew exactly what he wanted and could not find anything out in the market at the time that would suit his needs…he had already been on a few of the other manufacturers express yachts, only to be disappointed one way or another by the ride, quality, lack of customization or options.  I told him that the first 2 45 Hatteras Expresses would be debuting at the Ft. Lauderdale boat show, and that would be a great time to get aboard them and see what he thought.

At the Ft. Lauderdale boat show I took Jack aboard the new 45 Hatteras Expresses…we spent hours pouring over every nook and cranny of the boats.  He did not want to seem over-excited as we had yet to settle on a price, but it was definitely checking off everything on his list.  After feeling satisfied that the GT45x could be the right boat for him, he began to ask questions about the items that would need to be added and areas that would need to be customized to fit his needs.

Below are a few examples:

2. He wants joystick docking and position holding.  the 45EX has an option for CAT360, which offers both with the reliability of shaft drives.  Check

3. He wants gyro stabilization to minimize rocking while underway and at anchor. The 45EX has an option for a Seakeeper 5 gyro stabilizer.  Check

4. He wants sleeping for up to 6 people below decks for him and his fishing buddies.  Hatteras designers and engineers drew up plans for a master stateroom that would have 3 bunks.  So with that and 2 bunks in the guest stateroom and 1 sleeping on the convertible sofa, it was done.  Check

5. He wants to be able to watch TV with his buddies in the helm area.  Hatteras designed a pod to accommodate a drop down TV on the starboard side of the helm area.  Check 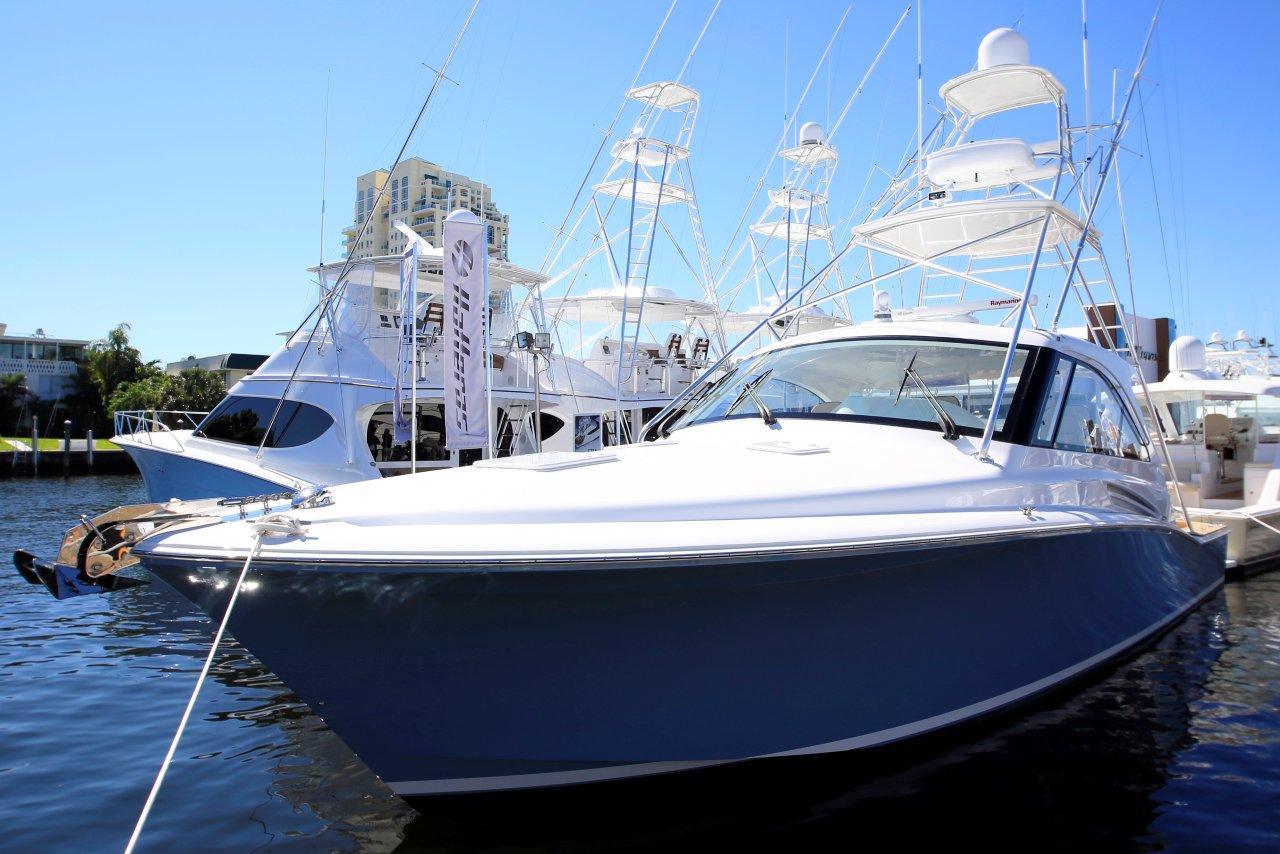 After the Ft. Lauderdale boat show I took Jack out for a ride on the 45 Express in rough seas and he was extremely impressed with the way the boat handled and took the waves, in addition to the very minimized engine noise and solidity of the vessel.

So after doing his research, inspecting, talking about the upgrades/customizations, and sea trialing, Jack knew that the Hatteras 45 Express was the right boat for him.

After a bit of haggling a deal was reached and a new 45 Hatteras Express was commissioned!

I spent quite a bit of time with Jack in the following weeks going over all the options and customizations that he would like to ensure that the boat would be just the way he wanted it with no detail overlooked.

A bit about the timeframe and payment schedule for Hatteras and the 45 Express:

*The payment schedule is the same for all Hatteras Yachts, but the larger models of course will take longer to complete, as much as 18 months for the 100 Motoryacht.

Hatteras will assign a build manager to oversee the construction of your new yacht, and he will act as the factory liaison throughout the process.  You will receive weekly updates on the progress of your yacht as well as photos of the construction progress.

In addition to these regular updates, Hatteras strongly recommends making at least one trip to the factory in New Bern, North Carolina to see your yacht while under construction.  While there you will get a tour of the whole factory to see how your yacht is made, meet the people constructing your yacht and get a feel for the attention to detail and quality of construction that Hatteras employs.

Below are some pictures of Jack visiting the Hatteras factory to see his 45 Express being built and other 45 Expresses in various stages of production:

As your yacht nears completion, Hatteras will contact you to set up a delivery date.  You can elect to take delivery at the factory in New Bern, North Carolina or have it delivered to you.

So as Jack’s 45 Express neared completion, a delivery date was set and plans were made!  He elected to take delivery at the factory and run it down to her berth in Florida with a couple of buddies, giving him a nice little trip to familiarize with the boat and her systems.

After the final rigging process Hatteras thoroughly tests all of their yachts before delivering them to ensure that all systems are operational and ready for the new owner.

Jack arrived at the factory in New Bern, North Carolina on Wednesday afternoon, a couple days before final delivery with 2 of his buddies.  We got the boat loaded up with all his gear that afternoon in preparation for the next day’s sea trial and orientation.

After an extensive day of orientations, we pulled back into the dock at the Hatteras factory.  After spending the day aboard the boat, Jack had a few small modifications that he wanted to have made to the boat…the boys at the factory jumped right on it.  Extra towel rack, cover for the transducer housing, divider in helm storage area…they were all done right on site as we looked on!

With the orientation complete and Jack very happy and satisfied with the boat, we went into the Hatteras welcome center and signed the final paperwork to make the boat officially his. 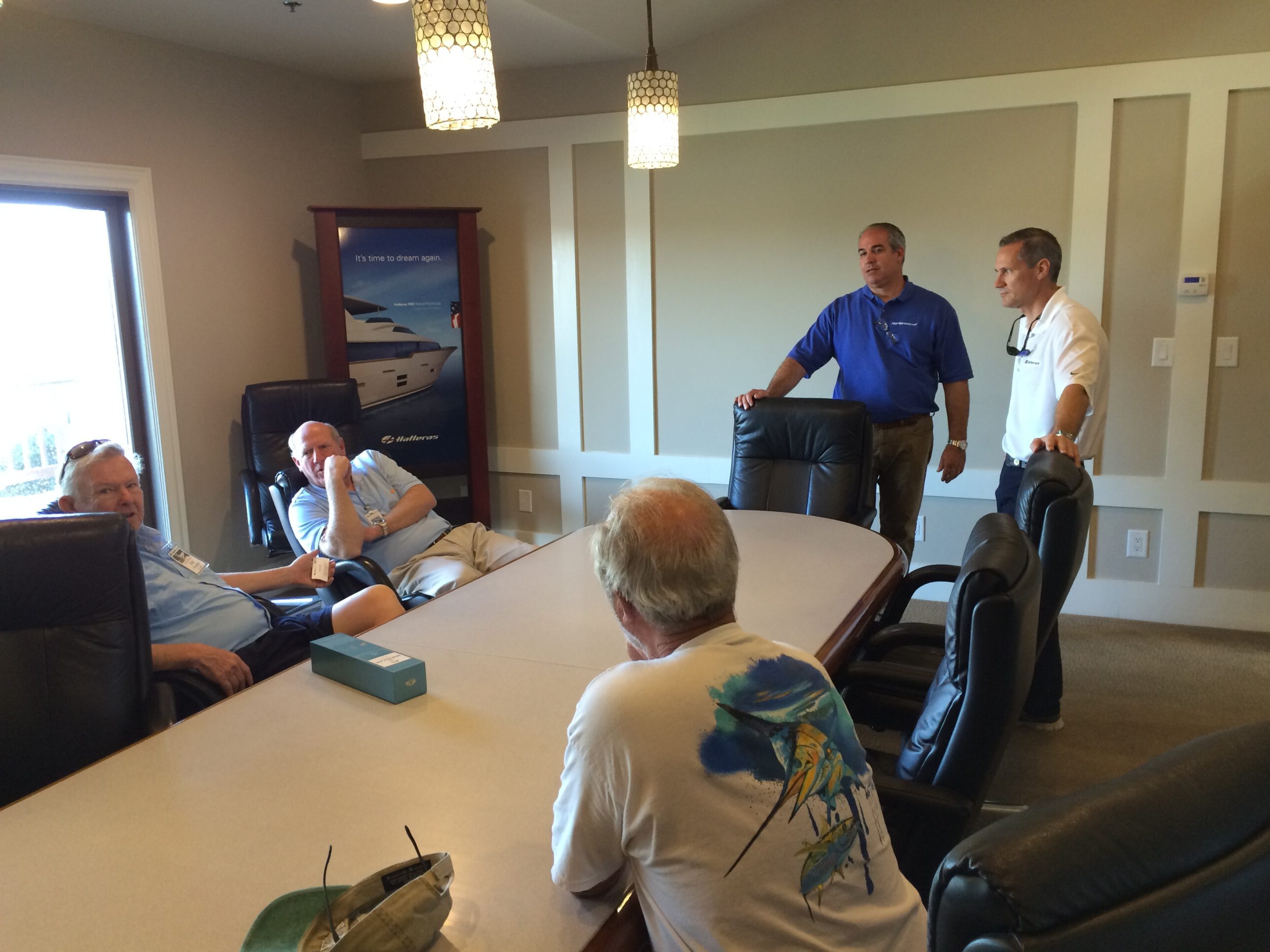 From there we had a celebratory dinner at a local restaurant with more than a few glasses being raised to the new Hatteras owner!

The next day we arrived at the Hatteras Factory for Jack to take his final delivery and head south to Florida.

The christening ceremony was great!  Hatteras had all the factory workers that took part in building the boat come out to see her off and say hello to the new owner.

In the initial run from the factory to Beaufort, NC, Two Hatteras personnel and a Hi Seas navigation electronics tech came along to help answer any questions.

The experience of building a yacht with Hatteras is like none other, from beginning to end they truly go the extra mile to make sure that all your expectations are met or exceeded.  As a yacht broker going through this process with my client I now understand why Hatteras is among the best yacht manufacturers in the world.

The experience with the people at Hatteras does not end there either…they have the best in class 2 year bow to stern warranty.  Any issues or questions and the Hatteras service manager is just a call away.

For more information about Hatteras Yachts please contact me, Jimmy Rogers, CPYB at 727-734-8707 or e-mail me at Jimmy@TGYG.com.